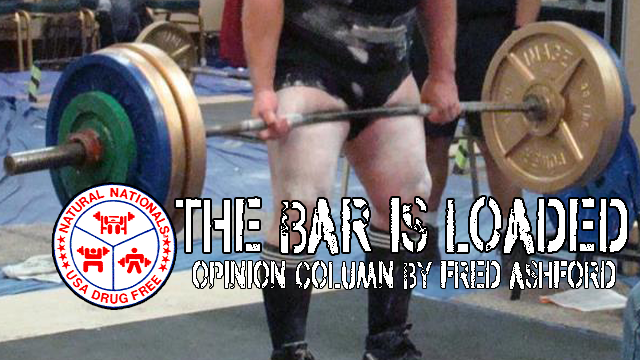 I lifted back in the Grand Nationals in Alvin, TX. I got to tell you – I had a blast. I met a load of great people, enjoyed a very well run meet, was supported by an active crowd and put in a decent 12 for 12 day on the platform. Big fun. I also had myself one of my great ‘epiphanies’. To understand my moment of serendipity, we have to go back to the eighties once again.

The eighties was a period of growth for powerlifting. Although the roots go back to the sixties – powerlifting was truly recognized in the mid seventies. Terry Todd’s book – Inside Powerlifting – did a lot to move powerlifting into the mainstream as a competitive enterprise. During the growth spurt of the eighties we experienced a lot of growing pains. I won’t go into detail here but if you want to read more scroll down to article #2. Through this period I lifted in meets sanctioned by the USPF, the APF, MSSA, NASA and the ever-popular unsanctioned. Most lifters were cutting their teeth in various organizations and you’d run into the same ole’ faces at different venues / organizations. I remember lifting at a six platform meet in Pecos, Texas in 1985. Six freakin’ platforms!

It’s hard to define the culture of powerlifting during this period. Folks were – well – in it for themselves. I guess I could label it ‘selfish’ if I had to. There was a great organizational split at the end of the eighties (article #2) and organizations were created where once a backyard stood. I left competitive lifting in ’94 due to personal circumstances (bad job, bad second marriage, bad attitude – things were, well, bad). Now that I’m on my second go around, I’m having one heck of a time. The Grand Nationals was my third meet back. I couldn’t be happier with my progress. But, I am more pleased by the state of powerlifting – at least in NASA.

During the meet I met and had conversations with just about everyone. Yea, that’s me. I will fellowship literally right up to my lift. It takes me about 5 seconds to get in the zone and I enjoy the conversations. I had a chance to converse with a young up-and-coming 198 lber. Abel Gomez. Abel asked me why I lift NASA. I had shared how I meet Rich in 1985 via a letter I wrote upon my return to Carlsbad, New Mexico. I told Abel how Rich scheduled a meet in my home town were no lifters existed. I explained how Rich brought powerlifting to the southwest based on a simple letter.

Think about it – we now have outstanding representation in New Mexico and national meets in Arizona. I’m a loyal guy. I wouldn’t lift anywhere else. And that’s what I shared with Abel. But, by the end of the meet I have found a greater reason to maintain loyalty to NASA (not that my friendship with Rich isn’t enough).

I discovered that the group from South Texas that I lifted with is much like the group in Arizona. And, I would venture to guess much like to group from Colorado, Ohio, East Texas and so on. The South Texas lifters were friendly, accommodating and treated everyone like family. It was great to hear George Wells conduct the rules meeting. I can still hear him say “If y’all are waiten’ for a down command in da’ bench – y’all will be waitin’ alooong time. ‘Cause we don’t give down commands in NASA”. I had to strain to hear the words through the South Texas drawl. But everyone there laughed and understood clearly. I’m more than sure that my manner of speech was a little funny to them. I sat next to Ron Harris – a masters 2 lifter – who is stronger than an ox. What I found most intriguing was Ron has been lifting in his basement for years and didn’t realize powerlifting was a competitive sport. He just stumbled upon NASA and now he sports a national championship. I shook hands with Darren Turley only to realize I have weak hands. I had the opportunity to provide a little coaching to Doug Singleton on his third deadlift attempt. Doug has great conventional form and I just told him maintain form and keep pulling. Although it may seem heavy at the knees – keep pulling. He made his lift with ease. On my third attempt I almost laughed out loud once I got it to my knees because the lift was indeed heavy. And, I damned sure couldn’t drop it after giving Doug that advice. What I’m getting at was how amazed I was at how well everyone treated each other. It is eerily similar to NASA meets in Arizona. There is a sense of community. And then my epiphany. My mind went back to my MBA studies.

In 1986 two psychologists – McMillan & Chavis developed an instrument and theory around the “sense of community” that has been validated and is widely used in this area of psychological literature.  McMillan & Chavis propose that ‘sense of community’ is composed of four elements:
MEMBERSHIP (which includes five attributes): boundaries; emotional safety; a sense of belonging and identification; personal investment; and a common symbol system .
INFLUENCE – Influence works both ways: members need to feel that they have some influence in the group, and some influence by the group on its members is needed for group cohesion.
INTEGRATION AND FULFILLMENT OF NEEDS – Members feel rewarded in some way for their participation in the community. And,
A SHARED EMOTIONAL CONNECTION
Listen, I’m as conservative as they come. Well, after reading some of the comments on the board, I’m more conservative than some. So, I’m not getting all “Hillary Clinton – It takes a village” on y’all. I’m just pointing out an obvious by-product of NASA. Rich comes to town with Tad and Devon. With a little help the trailer gets unloaded and set up. With a lot of help the meet is conducted. And, most help comes from lifters. Not too many non-lifters know how to spot or spend the time to become a judge. In NASA meets you won’t hear cussing, won’t see someone throw their belt, won’t hear folks complain, won’t see goons slapping each other in the face, and you won’t see prima-donnas. You will see seasoned lifters help out newer lifters (MEMBERSHIP). You will witness lifters cheer on and congratulate their fellow competitors (INFLUENCE). You will watch a lifter judge a flight right after his (INTEGRATION). And you will see lifters console each other after a failed attempt (CONNECTION).

Rich built NASA. But he created more than an organization and has provided more than a venue to lift in. He created a vehicle which has allowed us, the lifters, to define our culture. NASA has become a great community of lifters. A family if you will. Funny – I had to go to Houston to realize I was home.